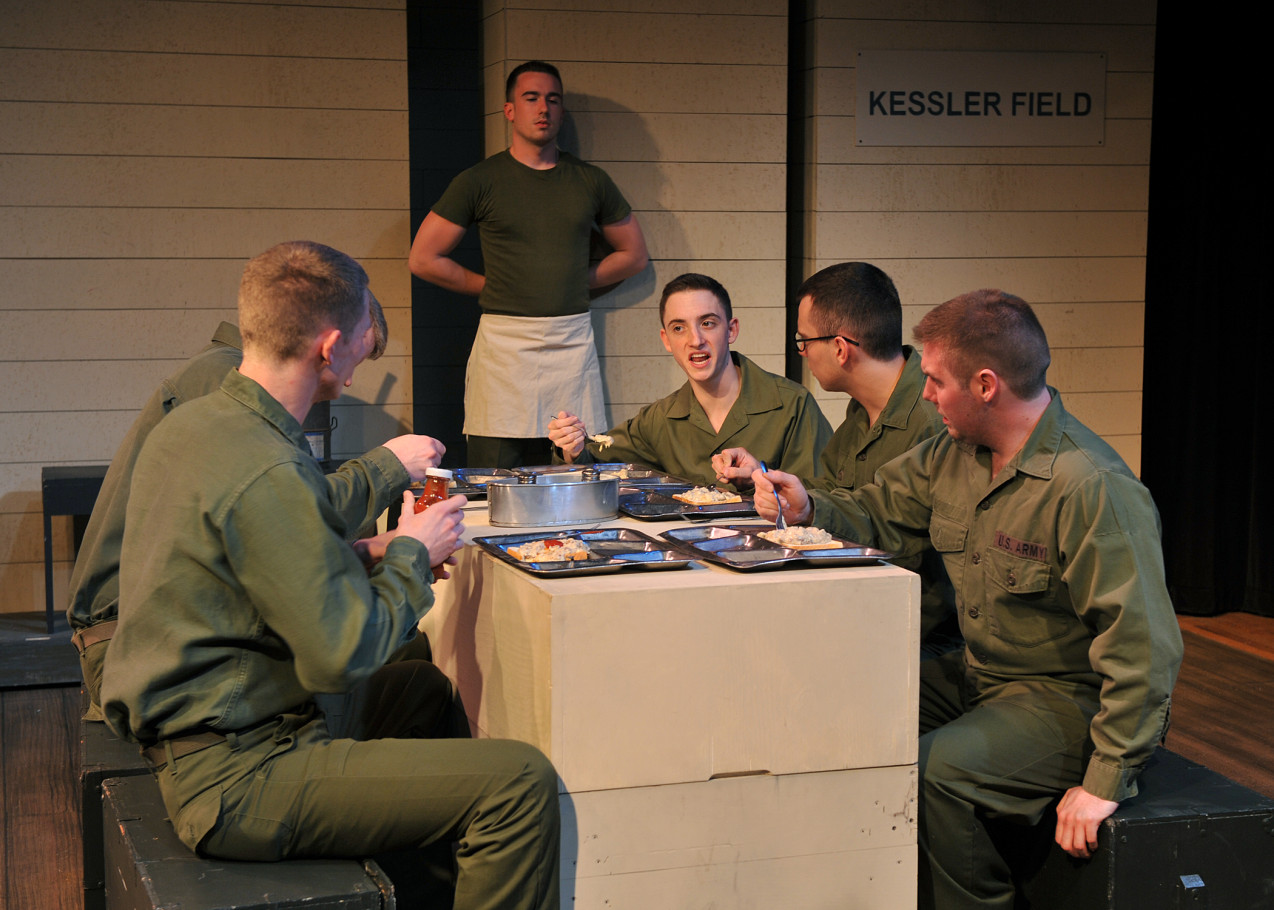 Around Town @ The Journal Record

CityRep, in partnership with Theatre OCU, is staging Neil Simon’s Biloxi Blues at Civic Center Music Hall’s City Space Theatre and it’s a production you won’t want to miss. The involvement with Oklahoma City University is a close one: Eight members of the 10-person cast are acting majors at OCU. The other two are mature actors with excellent theater backgrounds who worked hard to keep up with the talented students. The play is sponsored nationally by Macy’s.

Incidentally, nine of the players are candidates for membership in Actors’ Equity Association, and one is a member. Also a member is Oklahoma City-Repertory Theatre’s associate artistic director Michael Jones, a member of the Society of Stage Directors and Choreographers.

Back to the play. Second in a trilogy by Simon, the plot is set at an Army base in Biloxi, Miss., where six young recruits arrive for basic training during World War II. The story centers on 20-year-old draftee Eugene Morris Jerome from Brooklyn. He learns to cope with fellow soldiers from all walks of life and falls in love and loses his virginity under less than ideal circumstances (the funniest part of the play!), all while dealing with the eccentricities of his very unusual drill sergeant, Sgt. Merwin J. Toomey. Toomey meets his match with another recruit, Arnold Epstein, who wins.

Jerome, played by a real three-name actor, Drew Michael Feldman, a sophomore at OCU, is keeping a memoir book of his life, including the Biloxi segment. He considers his writings about his fellow recruits private, but they find out and read what he’s said about them, causing turmoil.

Emelio Velasco, studying for his bachelor’s in acting with a double minor in costume design and directing, takes the role of Epstein, a recruit harassed for being Jewish. His responses to all challenges are calm and collected and infuriate Sgt. Toomey, played by Ben Hall, an actor in regional theater as well as a commercial and feature film actor and voice talent. He is the in the music video for the Radar Brothers’ song Brother Rabbit and appears as the character “Duke” for the Oklahoma City Barons hockey team.

The female roles are played by AEA member Linda Leonard as Rowena, the prostitute who introduces non-virginity to Jerome, and OCU student Colleen Marie Daley as Daisy Hannigan, the sweet young thing Jerome meets at the USO and falls in love with.

The other recruits with whom Jerome is serving are OCU actors Oscar J. Kincheloe as Selridge, Daryl Bradford as Wykowski, Garrett Henderson as Carney, and Justin McInnis as Hennesey.

As I had not seen Biloxi Blues as a stage play or a film, I wasn’t sure what to expect and I enjoyed and was impressed by the players and the interplay among them. As Jerome, Feldman was admirably naive but wise. Velasco as Epstein was a hero in his mental challenges to the steely sergeant. All of the cast members became the roles they played and deserve kudos. Feldman, as actor and narrator, provided sensitivity, integrity and empathy as the fellow recruits reacted to wartime army training. The well-balanced cast puts on a great show.